Your biggest purchase will be the hive.

The modern hive, with its replaceable frames, is a recent invention, perfected by Langstroth in the mid 19th century. Key to its success is that it largely avoids damaging the colony when honey is removed.

It comes in many forms starting with the most basic and very common British National to the Langstroth and the traditional peak roofed one that we all associate with beehives, the WBC (named after its designer, William Braughton Carr).

Many beekeepers use the National type, and starting with that type is probably a good idea. After you have some experience with one or two hives you might want to try another design.
If you would like to understand what makes up a hive, you caan read about the different types in the following pdf file. popular_hives_UK
Cedar is the wood of choice for hives, so check when buying as some homemade hives may be made of other wood. Cedar wood is preferred because it strong but not heavy and does not need to be treated with preservative.

You will need to have suitable clothing: a bee suit and veil, suitable boots, and gloves.
A full bee suit gives total protection, though some beekeepers use just a jacket and veil. Wellington boots are fine.
Gloves will get sticky from the propolis in the hive, and could transfer disease from one colony to another, so thin disposable gloves are best. Leather gloves can retain bee stings, which will annoy the bees, and also disease, so are not recommended these days. For all clothing, it is vital to have overlaps to stop the bees entering your clothes as they walk upwards.

As far as equipment is concerned, as a minimum you will need:

The smoker is used to keep bees away from the part of the hive you are working on. It burns slowly and produces cool smoke which will not harm the bees. When they encounter smoke their 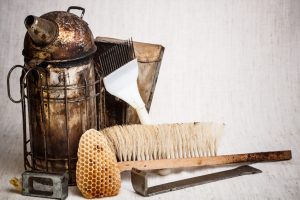 instinct is to go to their honey stores and feed, which in the wild would be their way of dealing with a fire which might threaten the colony.
The hive tool is used to separate the parts of the hive when opening it and to free the frames before removing them. A tool is needed because the bees seal small gaps in the hive with propolis, which is essentially a resin glue.

A list of equipment suppliers can be found here. (Note these are not a recommendation from the WVBKA)