LOOK OUT THERE’S A SWARM ABOUT!

Alternatively go to the BBKA website at https://www.bbka.org.uk/swarm where you can find a swarm collector near your location 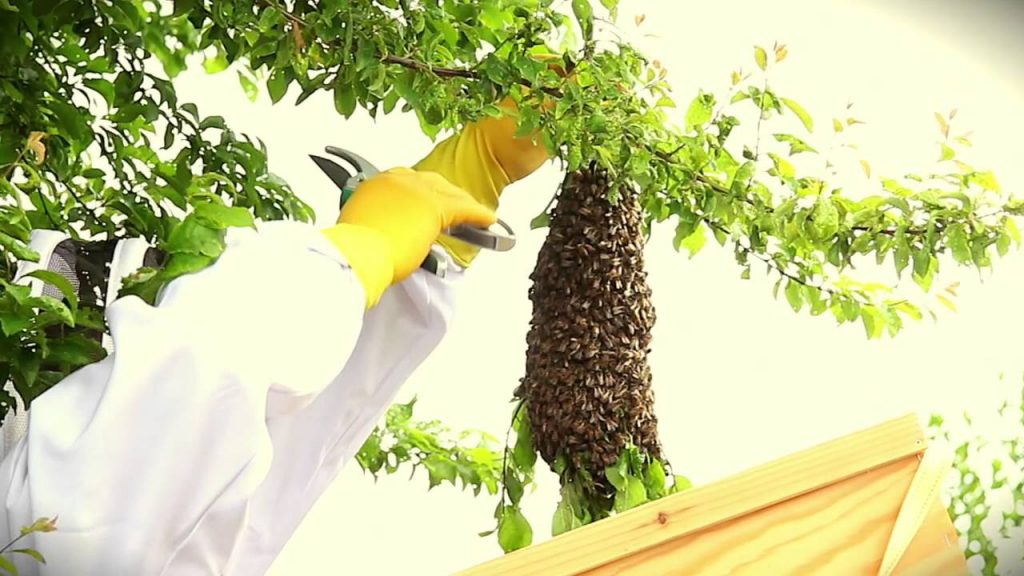 A swarm in May is worth a load of hay;

a swarm in June is worth a silver spoon;

but a swarm in July is not worth a fly.
Samuel Hartlib, 1655

Its a sunny afternoon and you are sitting in the garden, gradually a faint buzzing noise gets louder and the air fills with thousands of insects. They seem to be everywhere, all around you. Run for the house and shut the windows and doors. You have just experienced a swarm of honey bees looking for somewhere new to live. It may be frightening but they are not intent on attacking you, they have left their home and are now looking for somewhere suitable to establish a new colony.

Swarming is the honeybees way of reproducing and increasing the number of colonies. When the conditions are right a colony of bees may decide that they should split up and some of them will leave to start a new home. There are many reasons why a colony of bees may swarm; overcrowding in the nest, lots of food, good weather and many other small prompts which as yet we do not fully understand. But somehow the colony decides to swarm, the queen stops laying eggs and slims down ready to lead some of the workers off to a new location. At the same time the workers in the colony recognise what is going on and start to develop a new queen. They feed some of the larvae extra Royal Jelly and develop a special cell for the queens to develop in. Once this stage is reached the current queen sets off taking about half of the worker bees with her. At this time of year that could be 10,000 bees or more. The queen leads the flight and all the workers fly around her. This is a swarm and it is what may arrive in your garden uninvited.

As the saying above indicates a swarm early in the year stands more chance of surviving than later in the year. First they have to find a new home and then they have to build up enough reserves to get them through the coming winter. About 25% of the swarms that set off will survive to make it through to the next spring, the rest perish for one reason or another.

What can you do to help their chances. When that swarm arrives in the garden they will usually all settle in a tree or bush and look like a large rugby ball with only a few bees actually flying around. They will stay in that position while the scout bees look for a more permanent place to move into. This could be a hollow tree, a chimney, a cavity wall or sometimes less suitable containers. While the bees are resting in your tree they can be collected by a local beekeeper, who will take them away and put them into a hive and feed them up to try and get them established before the winter.

In Herefordshire you can contact Wye Valley Beekeepers and talk to our swarm coordinator Mrs June Williams on 01981 550320 she will find one of our beekeepers who is able to come and collect the swarm, or you can go the British Beekeepers web site and follow their links to find a local swarm collector. If a beekeeper can collect the swarm the chances of the bees surviving will increase significantly.

The worker bees that did not leave the hive with the Queen will now frantically encourage the new queens they have been feeding up to develop and hatch. There may be several queens developing at the same time and it is a race for their lives. The first new queen to hatch will kill off the other developing queens. She is a virgin queen and needs to mate before she can start laying eggs. She leaves the hives on her maiden flight and mates on the wing with the drones that are waiting for a female to arrive above the honeybee colonies. She returns to her colony and after a few days begins her life of egg laying.

Looking after bees is a fascinating hobby and learning to recognise when a hive of bees is preparing to swarm is one of the skills taught at Wye Valley Beekeepers. Anyone can keep bees but learning more about them enables the beekeeper to appreciate the complexity of the honey bees life style and to begin to understand how we can work with the bees to keep them safe and healthy and to share in their bounty. Who doesn’t love a spoon of honey?